Saved by the Book 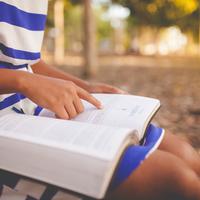 Its New Age veneer aside, the self-help genre has been evolving and thriving for millennia. Canonical books of all cultures are full of advice on how to live a more moral and satisfying life. The Upanishads, written by Hindu sages from an ethnically diverse Indian society, emphasised the necessity of treating others with tolerance and respect. ‘For those who live magnanimously,’ one book states, ‘the entire world constitutes but a family’ – advice that continues to help readers navigate today’s pluralistic India. The Jewish thinkers who wrote the Bible’s Old Testament in the 7th century BCE advised the narrow yet fulfilling path of strict adherence to God’s commandments, which seemed a fitting, unifying maxim for a people often beset by empires waging attack.

One of the earliest self-help guides in wide circulation was Marcus Cicero’s De Officis (On Duties), which the Roman politician wrote as a letter to his son. Cicero advised the younger Marcus to focus on meeting obligations to others, even if it required great sacrifice, and warned him away from shallow sources of gratification. ‘Brave he surely cannot possibly be that counts pain the supreme evil,’ Cicero wrote, ‘nor temperate he that holds pleasure to be the supreme good.’ This advice was rooted in Roman mos maiorum (ancestral custom), which emphasised loyalty to the empire above one’s own wellbeing – an ironclad moral code that fuelled the empire’s expansion for many years.

Centuries later, farmers, tradespeople and politicians laboured mightily to establish the still-young United States as an economic and social power. The new country’s citizens – who often lived off the land and took pride in stalwart self-sufficiency – found kindred spirits in self-help spokesmen such as Henry David Thoreau and Ralph Waldo Emerson, both of whom emphasised the sacrifice and struggle required to lead a meaningful life. ‘A great man is always willing to be little,’ Emerson opined in an 1841 essay. ‘When he is pushed, tormented, defeated, he has a chance to learn something.’

But by the mid-20th century, such self-abnegation was no longer in vogue. The prosperous Western economy was fuelling a generation of opportunists obsessed with maximising and flaunting their talents. A flurry of self-help books arrived to mark this transition, including Dale Carnegie’s How to Win Friends and Influence People (1936).

Overnight, it seemed, personal agency and self-insight had become hot commodities – Freudian psychoanalysis was all the rage – and the new self-help titles initially seemed to offer a painless shot at a certain kind of lasting change, one based on consciously shifting your thought patterns.