An annual award for newly published research or thinking that has been recognized to be outstanding by members of the Information, Medium & Society – The Publishing Studies Research Network. 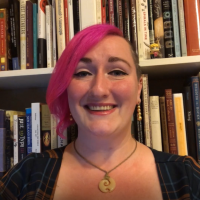 The Beetle and the Bard: Aspects of 17th Century Printing Practice as Illustrated by the Works of Thomas Moffet and William Shakespeare

The studies of the works of William Shakespeare and the history of entomology are not rife with commonalities at first glance, but when compared using print history as a frame, aspects of the fields begin to overlap in fascinating ways. This article explores these overlaps, with a focus on information gleaned from material evidence in the textual ornaments included in both Shakespeare’s First and Second Folios and Thomas Moffet’s “Insectorum sive minimorum animalium theatrum.” By tracing the printing chronologies of these works, as well as who printed them, we are able to deepen our understanding of both the time in which they were made and their importance as artifacts.

The 1623 work Mr. William Shakespeare’s Comedies, Histories & Tragedies, more widely known as the First Folio, is the most heavily studied early modern English book in the whole of Western canon thanks to its significance to the history of drama and language. Well known as a cultural icon, the book itself shares many material aspects with other English books produced around the same time. Comparing the First Folio to any of its contemporaries is a useful exercise; the broad scholarship surrounding the Folio can be used to inform our understanding of the production of what it is being compared to, both in terms of similarities and differences.

Exploring the relationship between the typographical ornaments of the First Folio and Thomas Moffet’s 1634 entomological work Insectorum sive minimorum animalium theatrum [The Theatre of Insects, the Least of the Animals] began through serendipity. I was not looking for a research project at the time, but stumbling across the satyr tailpiece—famous within material Shakespearian study for its importance in identifying what plays were printed when—in Moffet made me scratch my head enough to start doing some research. My initial question of “Why does this distinctive ornament show up in two works apparently printed by different people?” led to a deeper examination of 16th and 17th century English printing practices, and finally to gathering evidence about a different typographic ornament that seemed to be absent from the scholarship. As it became clear that nothing had yet been published on this ornament—a headpiece featuring a distinctive shock of wheat that appears with a head in some works and without a head in others—I knew that I needed to write something up.

I view this article as a jumping-off point for other scholars who want to delve more deeply into what this headpiece means to the printing history of specific books. I hope that highlighting the ornament in this way will lead to engagement with the ornament from both a humanities perspective and a more digital one; tracking the changes of the headpiece across different works would be an excellent project for an image-detecting algorithm. I am pleased that this article has enabled me to make new connections in the field of material culture and bibliography, most notably with a colleague in Australia who is doing a study on the history of the satyr tailpiece before and after the time period highlighted in my work. I have further used this research in my position as a special collections reference librarian, describing the curious publication history of Moffet’s work using the actual book in the reading room.

Could the Digital Option Work for a Book Market under Stress?: The Case of Greek Publishers

Ben Lerner and the Novel in the Age of Digital Media

A Codicology of the Interface: Reading Practices and Digital Reading Environments

Peer Review and the Revolutionary Academic: A Kuhnian Critique

Innovation and the Future of e-Books