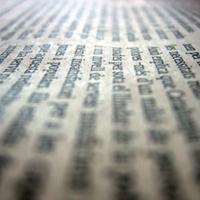 Google Fonts, the company’s archive of free, open source fonts, lists more than 800 typographic designs. But Noto Serif CJK, which the company unveiled today, is unique in its utility. It looks consistent across Chinese, Japanese, and Korean languages, as well as English, Cyrillic, and Greek scripts. Crafting it was no small feat: Google partnered with Adobe and worked with five international type foundries to design thousands of letterforms that are authentic to each culture, yet still manage to look unmistakably related.

Noto Serif CJK is a gift to anyone who builds products in multiple languages. “When you take two fonts and mix them together, you’ll see that the characters don’t look right together,” says Bob Jung, Google’s director of internationalization efforts. He calls it the ransom note effect. It’s a major hurdle for designers who work with Chinese, Japanese, and Korean (CJK) scripts. Those languages contain tens of thousands of characters versus the mere dozens you find in Latin and Cyrillic scripts. Developing a universal CJK font that evokes the same look and feel as, say, Times New Roman, is very hard to do.