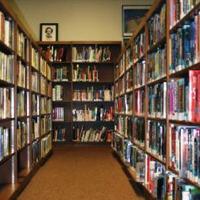 Photographer Thomas R. Schiff’s obsession with libraries began over 20 years ago. “I became fascinated by how the history of the United States is reflected in our civic buildings; how the great old libraries on the East Coast, of two centuries ago, evolved into dynamic, contemporary public spaces like the Seattle Public Library, or the Salt Lake City library,” he writes in The Library Book (Aperture, 2017), a new monograph featuring panoramic images of over 100 American libraries. “The interest for me is in the arc of history.”

The first truly public library in the United States opened in 1790. After a Massachusetts town named itself after Benjamin Franklin to honor the statesman, he gifted a portion of his personal collection as an expression of gratitude. The city decided to lend the books free of charge. Prior to that, they were mostly the domain of wealthy individuals and they were privately owned collections. Some, like the Library Company of Philadelphia, were accessible through paid memberships. In the 1800s, industrialist and philanthropist Andrew Carnegie spent $60 million to open over 1,600 public libraries across the country.

“If readers’ private libraries are symbols of their private identities, the public libraries of the society in which they live symbolize the communal one,” Alberto Manguel, a Canadian essayist and bibliophile, writes in the book’s introduction. “A public library is the memory, the voice, and the face of the society that houses it.”